The Rose was the first of the Bankside theatres south of the River Thames. It was located on the north side of Maiden Lane (now Park Street), west of Southwark Bridge.

This playhouse was opened by entrepreneur Philip Henslowe in 1587 and staged plays until 1604, being dismantled soon after. From 1594 to 1600 the Rose was home to the Admiral’s Men, who removed to Henslowe’s and actor Edward Alleyn’s new theatre, the Fortune, near the modern day Barbican area. They staged plays by Christopher Marlowe, Thomas Kyd’s The Spanish Tragedy, and early works by William Shakespeare, including some of his Henry VI history plays. 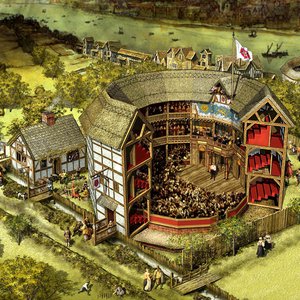 Cutaway of the Rose by William Dudley

From the Southside of St Paul’s on St Paul’s Churchyard cross the road near the Visitor Information Centre and walk down Peter’s Hill onto the Millennium Footbridge, and once on Bankside walk past Shakespeare’s Globe turning right at Beargardens. Walking past the site of the Hope theatre, which stood about halfway along this road, turn left into Park Street, soon arriving at the Rose site on the left. From the Rose site cross Park Street and walk under Southwark bridge, the site of the original Globe being immediately on your right.