Located on the south side of Maiden Lane (now Park Street), under Anchor Terrace, Southwark, just east of Southwark Bridge, the Bankside Globe staged most, probably all, of the plays of William Shakespeare, including famous titles such as Hamlet, King Lear and Othello. But it also staged plays by other dramatists, including Ben Jonson’s Volpone and many plays by Francis Beaumont and John Fletcher (who took over from Shakespeare as the resident playwright at the Globe and the Blackfriars).

In 1613 the Globe burnt to the ground during a performance of William Shakespeare’s Henry VIII. It was was promptly rebuilt and reopened on the same site and this second theatre is often referred to by theatre historians as 'Globe 2.' A few years later, in the early 1620s, Be Jonson had this to say about the event in his poem entitled 'An Execration upon Vulcan':

'But O those reeds. Thy mere disdain of them
Made thee beget that cruel stratagem,
Which some are pleased to style but thy mad prank,
Against the Globe, the glory of the bank,
Which though it were the fort of the whole parish,
Flanked with a ditch and forced out of a marish,
I saw with two poor chambers taken in
And razed, ere thought could urge this might have been.
See the world's ruins, nothing but the piles
Left, and wit since to cover it with tiles.' 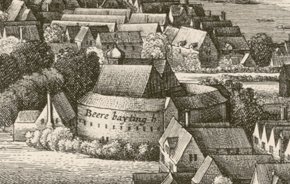 The Globe from Hollar's 'Longview', incorrectly labeled as a bear-baiting arena (Courtesy of the London Metropolitan Archive)

From the Southside of St Paul’s on St Paul’s Churchyard cross the road near the Visitor Information Centre and walk down Peter’s Hill onto the Millennium Footbridge, and once on Bankside walk past Shakespeare’s Globe turning right at Beargardens. Walking past the site of the Hope theatre, which stood about halfway along this road, turn left into Park Street, soon arriving at the Rose site on the left. From the Rose site cross Park Street and walk under Southwark bridge, the site of the original Globe being immediately on your right.