The Theatre was the first purpose-built early modern playhouse and the original home of the Chamberlain's Men (later the King’s Men after 1603).

Some of the early William Shakespeare plays were performed here up to 1598, possibly including his Romeo and Juliet, and this is probably the case with Thomas Kyd's famous The Spanish Tragedy and also some of the plays of Christopher Marlowe.

The Theatre opened in 1576, staging plays until its closure in 1598. Located at Shoreditch, the playhouse was built by James Burbage, who called it the ‘Theatre’ to evoke the idea of a Roman playhouse or ‘theatrum’. It became hugely popular with the first London playgoers.

After years of dispute, the Burbages, Shakespeare, and the Chamberlain's Men left the Theatre for good in 1598. We know this because the legal issues are exceptionally well recorded. Indeed, in one of the most bizarre turn of events in early modern theatre history, the Burbages had the Shoreditch playhouse taken down and rebuilt across the river as the first Globe playhouse. 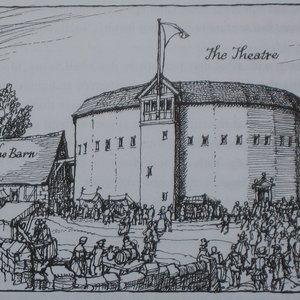