The Whitehall Banqueting House was a key royal performance site for dozens of Jacobean and Caroline court masques.

Designed by the classical architect Inigo Jones between 1619 and 1622, this last version of the Banqueting House still survives today. As well as being used for the masques of James I and Charles I, the venue also hosted state events and was a key location for the Stuart dynasty.

The very first (wooden) Banqueting House was located in Westminster within the Palace of Whitehall, but was ordered to be rebuilt by King James on several occasions, most notably in its present surviving brick-built form. The Banqueting House was one of the very first classical buildings in early modern Britain and often staged courtly entertainments known as masques by various dramatists, most notably court poet Ben Jonson. In 1636 the famous painted ceiling by Peter Paul Rubens was installed and masque performances were henceforth banned, as it was thought smoke from the numerous candles burned there for light would damage the richly painted ceiling. The ceiling (still present today) depicts 'The Union of the Crowns', 'The Apotheosis of James I' and 'The Peaceful Reign of James I'.

Individual masque performances could occasionally stir-up controversy. For instance, on the 6th January 1605 a performance of Ben Jonson's The Masque of Blackness, was later reported in a letter by courtier Sir Dudley Carleton (later to be the ambassador to Venice). But Carleton was less than impressed with the appearance of Queen Anna and her courtly ladies:

'Their Apparell was rich, but too light and Curtizan-like for such great ones. Instead of Vizzards, their Faces, and Arms up to the Elbows, were painted black, which was Disguise sufficient, for they were hard to be known; but it became them nothing so well as their red and white, and you cannot imagine a more ugly Sight, then a Troop of lean-cheek’d Moors.' 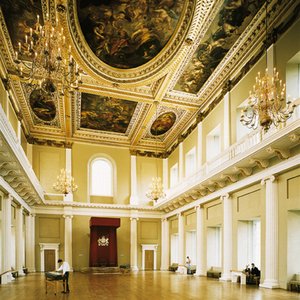