There were two Blackfriars indoor playhouses, both housed at the old Blackfriars monastery site in and near Apothecaries Hall. The first, smaller theatre, staged plays by boy actors in an upper room of the building from 1576 until 1584.

In the Jacobean and Caroline periods the venue became the most important indoor theatre in London and was the premiere theatrical venue of the age. From 1599 a new Blackfriars theatre staged plays by boy actors and from 1609 to 1642 it was the only indoor theatre of the King's Men or the 'Shakespeare company.'

In 1596 James Burbage (who had previously set up The Theatre at Shoreditch) bought outright for £600 the freehold on an adjacent set of 'upper frater' rooms that he turned into a second, very spacious indoor playhouse, which became the model for all future theatres. Unfortunately, due to complaints from Blackfriars residents, Burbage’s sons were unable to stage plays here with adult actors, so a boy company from 1599 was allowed to perform there. Eventually, when the plays put on began to offend the Crown, the boy company was forced to disband, the King’s Men now being allowed to perform there from 1609 onwards. Thereafter, until the playhouse closures in 1642, Shakespeare’s company were able to switch between playing at the indoors Blackfriars theatre in winter, and in summer to perform outside at the Globe.

At the Blackfriars in Caroline times the King’s Men catered for the refined tastes of their well-off visitors via an artistic cocktail of aesthetics and attraction: they used music and spectacle as well as their repertory of great plays at the indoor theatre. They employed their own consort of musicians, said to be the best in town. The famous lawyer Bulstrode Whitelocke, writing in the 1630s, had this to report on the Blackfriars and its use of music. His diary states that he

‘was so conversant with the musicians, and so willing to gain their favour, especially at this time, that I composed an air myself, with the assistance of Mr Ives [the famous composer], and called it Whitelock’s Coranto, which being cried up, was first played publicly by the Blackfriars Music, who were then esteemed the best of the common musicians in London. Whenever I came to that house (as I did sometimes in those days), though not often, to see a play, the musicians would presently play Whitelock’s Coranto, and it was so often called for that they would have played it twice or thrice in an afternoon.’ 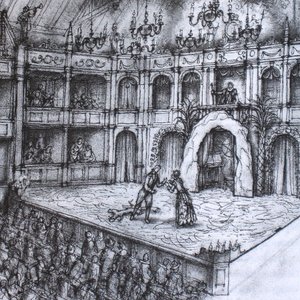 The Tempest at Blackfriars as imagined by Walter C. Hodges (Courtesy of Cambridge University Press)