Along with the Fortune, the Red Bull was one of the so-called citizen outside playhouses.

This was located at what is now Haywards Place (previously Red Bull Yard), which runs between St John’s Street (where the site can be accessed through a brick archway) and Woodbridge Street, Clerkenwell. The Red Bull opened in 1604 and staged plays through to the 1642 closure (the building actually stood until 1661 in the second year of the Restoration of monarchy). Plays put on here included John Webster’s The White Devil, as well as numerous plays staged by Queen Anna's Men in the Jacobean period.

That Red Bull and Fortune audiences were becoming receptive only to certain kinds of drama is perhaps evident from the fact that John Webster’s The White Devil (1612) was poorly received at the Red Bull. In the printed edition of the play Webster made it clear he felt the playhouse had been an inappropriate setting for the premiere of his darkly sophisticated revenge tragedy. It is often noted that in 1614 his The Duchess of Malfi was launched by the King’s Men at the far more exclusive Blackfriars indoor playhouse. 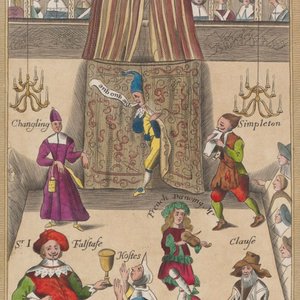 Playing at the Red Bull (Courtesy of the V&A)