The Cockpit opened in 1616 but was damaged by a riot. It was then reopened and gained the additional name of ‘the Phoenix’.

It was an indoor theatre built by Christopher Beeston. The playhouse continued to put on plays for London’s elite through to 1642 as a direct rival to the King’s Men and their Blackfriars playhouse.

Veteran Queen’s Men actor Christopher Beeston built this indoor theatre on the east side of Drury Lane at Cockpit Alley, which ran west-east between Drury Lane and Wild Street, and so it was the first theatre in the so-called west end, named after a real cockpit off Cockpit Alley. Like the Blackfriars and the later Salisbury Court playhouses, it was designed to attract the wealthier members of society (such as courtiers and students from the Inns of Court) and so it was part of the rarified social and theatrical scene that grew up in late-Jacobean and Caroline London.

Francis Lenton, The Young Gallant’s Whirligig, 1629, had this to say about the playhouse:

‘The Cockpit heretofore would serve his wit,
But now upon the Friars stage he’ll sit.
His silken garments, and his satin robe,
That hath so often visited the Globe,
And all his spangled, rare, perfumed attires,
Which once so glistered in the torchy Friars,
Must to the brokers. . . .' 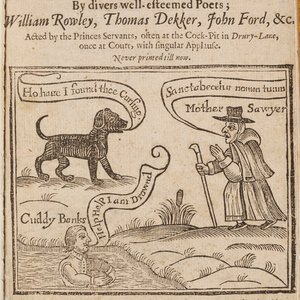 The Witch of Edmonton (Courtesy of the V&A)

From Holborn Underground Station walk south along the west side of Kingsway turning right on to Kemble Street. At the corner of Kemble Street and Drury Lane turn right into a passageway to the yard of the Peabody buildings estate, near the middle of which the Cockpit theatre originally stood.